A Brief Report Back from O22 March – From STLFTP.tumblr.com 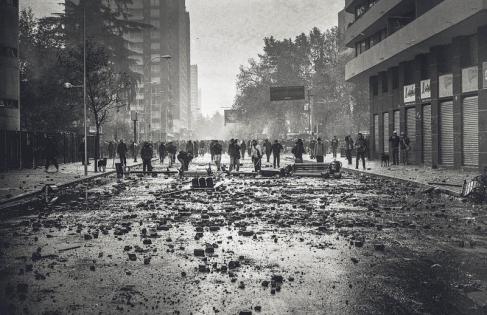 Brief Report Back from O22 March

On the evening of October 22nd roughly 50 people came together in the formerly occupied Kiener Plaza in downtown St. Louis. They were responding to the call for a march against police brutality to be held that night. Among them were family members of those recently killed by the police in St Louis.

Over the past year, marches in the downtown area have been met with little police response. This night however found the demonstration surrounded by officers on bikes, in cars and on foot at all times. Despite the overwhelming cop presence the march snaked its way through downtown taking the street several times. Posters were wheat pasted along the route and many leaflets distributed. There were no arrests.

The text of that leaflet is below.

“The Police – An organized armed force with the backing and material support of State power. The Police Department, INS, the FBI, etc…

To Police – The act of regulating a community and enforcing a moral standard with the intention of maintaining a state of control. An act anyone can do.

It has been a difficult year for St. Louis.

The continual attacks on poor communities, and places where people of color live and hangout have been a constant reminder of this hardship. The police are murdering record numbers of black men in this city. 7 in the last 12 months alone, not including those merely wounded by police bullets and the dozens beaten.

The police are enforcing the enclosure of downtown and implementation of a 21+ curfew on weekend nights. Young people are detained and arrested downtown for not contributing enough to the budding economy. Their nuisance abatement vehicles are parked up and down the loop; while police foot patrols harass the young people that try to congregate there. Surveillance cameras are an increasingly more common sight in places like Wash Ave, O’fallon park and the rest of North City; aiding the police in the cities attempts at gentrification and control.

But the police with badges and guns aren’t the only ones who control our lives and manage our bodies. We also face the even more insidious nature of policing—the act of regulating and controlling a group of people in order to keep them in line with a set of standards or laws.

While the police are the living and breathing apparatuses of institutional policing, it would be limiting to focus solely on the uniformed officers. There are many forms of policing that are equally sinister that are found in every aspect of our lives.

Every day we wake up confronted by a barrage of forces seeking to control us, to regulate us, to police us. Policing is when our husbands beat us, forcing us to stay in the role of wife. It is when queers are bashed in the streets, a reminder that sexuality must be repressed. It is when we force ourselves to go to work, because without those paychecks we will meet the harsh reality of homelessness. Policing is anytime someone, or something seeks to maintain a control over our lives.

It is when policing fails that those who seek to control us rely on uniformed police. They are the ones with the power of the State—the ability to lock us in jail and murder us with impunity. When we rebel against our conditions, what awaits us is the baton, bullet, court and prison.

However our struggle must go beyond a grudge with the boys in blue and encompass a conflict with all forms of police and policing. Because it is not only one form of policing but all forms that regulate and control our lives.”

After a repressive few months, we hope this march renewed some of the energy and enthusiasm for these kinds of organized acts of defiance. We are overjoyed about the new friendships made that night, and for the further exploration into the potential relationships we found in those willing to take that energy to the streets.

Here is to many more nights…

2 thoughts on “A Brief Report Back from O22 March – From STLFTP.tumblr.com”

feminismnowows
occupy california
Occupy Everything!
occupy everything for everyone
Occupy Patriarchy
The Occupation Times